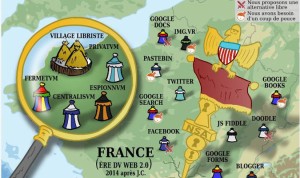 The whole WikiLeaks story raised a few comments I want to briefly share.

First, I was amazed to see that the global organic protest for the WikiLeaks cause has led to tens (if not hundreds) of thousands voluntary downloads of the botnet malware to participate in the global DDoS attack against WikiLeaks opponents. To the best of my knowledge (please comment and correct if I’m wrong), this is the first time in security history that people around the globe deliberately infect themselves with malware to fight for a cause. This isn’t any innocent fact like a blog or a Facebook group gathering millions of supporters, we’re actually looking at a form of modern digital weapon having the potential to disrupt operations of billions of legitimate users with consequences that may go far beyond the somewhat “simple” unavailability of one service. In our services led economy, this is a major issue. Paradoxically many claim this to be some form of ethical hacking allowing the voices of the small and the under-represented to be “heard” in the name of transparency and freedom of information. In any case, never in the past has digital protesting had such a tool to cast their voices. How this whole story unfolds and what position governments will take will be highly interesting to follow. We may actually be at a historical turning point of the Internet. Will we one day remember the Internet before 2011 as B.W. (before WikiLeaks) ? Hopefully not. Feel free to jump in and comment…

The second point I couldn’t help thinking about in connection with the WikiLeaks issue is the whole debate about “responsibility” and Ethics. Corporate Social Responsibility (CSR) has been around for a while now. It is being taught in almost every business school and in specialized master programs. Likewise, Compliance issues have led to a growing importance of regulatory frameworks following many financial scandals such as Enron, Worldcom, Martha Stewart, etc. More recently, the issue of a global financial crisis emerged and kind of vanished without actually being really addressed. Would we even be talking about this if people were more responsible and accountable for their actions ? Would WikiLeaks have even existed ?

So, the point is the following : both issues mentioned above relate to problems that have become global in their very nature and for which traditional remedies and approaches cannot apply any more (territorially bound legislation, global treaties, UN, centralization).

Internet Governance and Net Neutrality will require new approaches. Maybe not as technological and / or legal as one may think. Responsibility and accountability might be part of the equation. Acknowledging and taking into account the human factor appears to be the most promising direction to address many such problems. Eventually, it could even prove to be a major source of Empowerment for people in their roles and duties. This is the exact point that led me to consider managing exceptions in information security which may sounds totally counterintuitive at first sight (at least from a traditional point of view), but holds a lot of value when assuming people are : free moral actors, responsible; and technology is used to help and empower them rather than something to be circumvented in order to get the job done.

Several government led initiatives on digital content are appearing around the world. Has the time come to rethink creatively a few things or are we looking at some form of semi-coordinated effort trying to prepare us for the enactment of new laws in this area?

The UK government released today its interim report Digital Britain unveiling 22 recommendations and a road map towards a final report due this summer. On Digital Content, the interim report presents 4 actions on the economics (action 10) and on the rights and distribution (actions 11 to 13), arguing for :

A TED like summit is planed for April and in the meantime, interested parties are invited to join the discussion by sending their expressions of interest to : digitalbritain@berr.gsi.gov.uk before March 12, 2009.

The US FTC is organizing a DRM conference on March 25, 2009 in Seattle at the University of Washington Law School. Topics to be covered include basic introductory issues, legal, consumer issues and future trends. They are also inviting interested parties to submit comments and suggestions for topics by email to : drmtownhall@ftc.gov by February 9, 2009.

Oddly enough, it feels like states and governments around the world have all of a sudden realized that we have entered in the 21 century, that we live in a global networked economy and society where trade and services are now dematerialized and involve intangible assets. Paradoxically recent initiatives are starting to drop DRM (Apple iTunes Plus, just for music though).

All this may not be contradictory after all. Highly commoditized goods such as music nowadays may go DRM free provided there is some form of higher authority overlooking and requiring that the ISPs monitor user traffic to detect unlawful P2P file-sharing. The story might be slightly different with video premium content in the short term.

At the end of the day, we are likely to still have DRM and gain a global surveillance from our ISPs of our every packets flowing in and out of our homes, forced by law. So wouldn’t we want to get that DRM “thing” right ? Now would be the time to do it before we get into another fight about our civil liberties and privacy rights.